You are here: Home / Astrology / Uranus Square Pluto Part Four: How Are You Feeling? 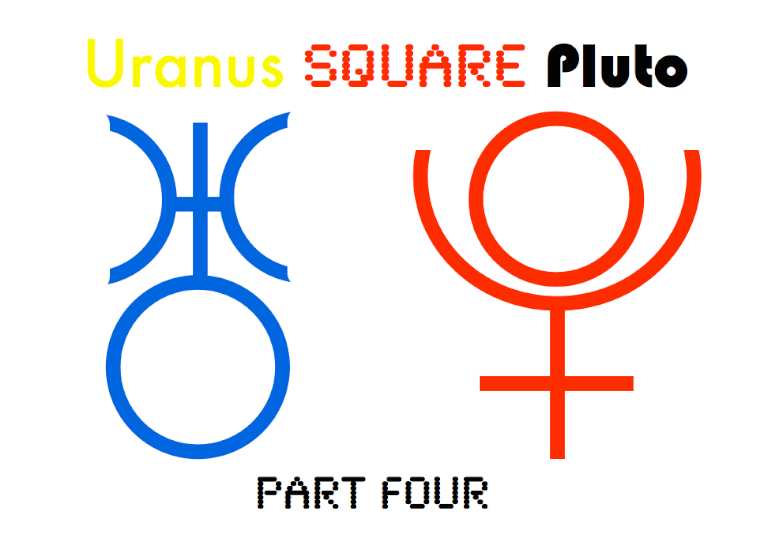 Humanity’s seven-part adventure in reckoning with Uranus square Pluto reaches its halfway mark this Friday, November 1, at 5:31 a.m. CDT when Uranus and Pluto form their fourth exact square during a three-year cycle of challenging alignments.

In addition, the Sun occupies deep, intense Scorpio for this square; with the Scorpion’s sign ruled by Pluto, we have an indication of just how important Pluto’s themes are for part four of the Uranus-Pluto square experience. With Mercury and Saturn also occupying Scorpio at this time (along with the North Node, symbol of our future direction or destiny), the push toward truth and the need to expose “secrets and lies” take on greater urgency.

Recapping Our Experience So Far

The first article in this series, “Uranus and Pluto 2012: Mid-’60s come of age, demand “report card”>Uranus and Pluto 2012: Mid-’60s come of age, demand ‘report card,’” showed how the current Uranus-Pluto pattern began when these planets came together in the health-conscious, perfectionist earth sign Virgo in the mid-1960s. Now, Uranus has moved forward to the brash, energetic fire sign Aries, while Pluto has reached the sober, ambitious earth sign Capricorn. Together, they form a difficult 90-degree angle called a square, which can bring challenges and clashes that force change.

The second article in this series, “Uranus and Pluto’s Transformation Timetable: Sept. 19 Square Forces Issues Around Virgo, Health,” explained how either Uranus or Pluto is retrograde during each square, except for the final one in 2015, when both will be in direct motion. When a planet is retrograde, it appears to move backward through the sky, disrupting the planet’s expression on the outer plane. If we resist this experience and keep trying to push ahead, we can experience intense frustration, but if we flow with the process, we have an opportunity to review and re-think how we’re expressing the retrograde planet’s energies.

The third article in this series, “Uranus Square Pluto Round Three: Fight Your Own Fight, KO What Needs to Go,” used a boxing theme to show how Uranus and Pluto differ dramatically and how awkward and frustrating their square formation feels as we try to integrate their energies. It also provided a chart showing the Sun’s sign, element, and mode for with each square and explained how these factors affect each square’s potential while giving us help in balancing Uranus’s and Pluto’s conflicting demands. 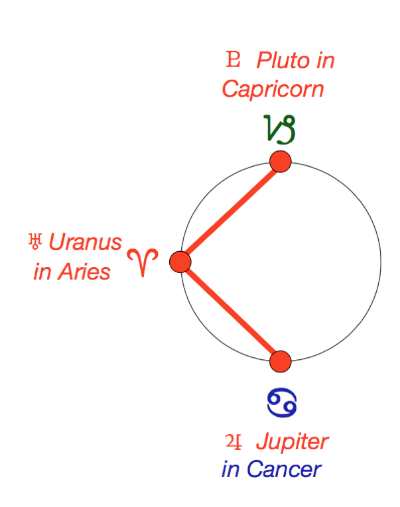 This year’s astrological energies have brought all of us extensive opportunities to tap into our emotions as well as our intuition and spirituality, and the November 1 square will raise the stakes, forcing us to feel more—and more deeply—than we ever thought possible.

When the year began, we already faced high emotions due to the Uranus-Pluto square. With freedom-demanding Uranus in fiery Aries, we have seen growing passion as well as shocking increases in anger around the world and in our personal lives. Pluto in Capricorn adds depth to our passion yet puts fear into the mix, and in its lower expression brings rage, secrets, and desire for vengeance. The combination of these two energies in a volatile square formation—called a “hard aspect” in astrology—has brought hard feelings this year as we all experience relentless, uncontrollable change.

In June, Jupiter joined the fray when it entered Cancer. That shift put giant Jupiter opposite Pluto and square Uranus. As shown in the “red dot” diagram here, these three planets now form a t-square, an even more intense form of square energy whose clashing character comes through via the color red, used here to indicate each planet and its position. 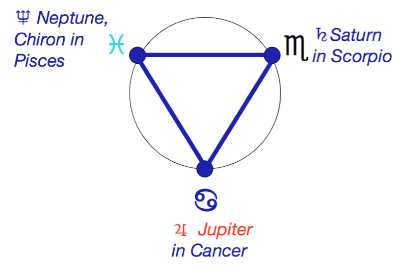 At the same time, the heavens have been filled with “water, water everywhere,” as numerous planets have been sitting in the highly sensitive, deeply feeling water signs.

Besides Jupiter in emotional Cancer, the “blue dot” diagram here shows Saturn in profound Scorpio and Neptune and the asteroid Chiron (associated with wounding, healing, and teaching) in dissolving Pisces. In addition, swift Mercury has spent extra time in all three water signs because its three retrograde periods in 2013 have occurred in Pisces, Cancer, and Scorpio.

All this watery energy, combined with Uranus’s electricity, Aries’s fire, Pluto’s volcanic force, and Capricorn’s determination, are giving us the high pressure that results when fire and water combine to create steam. While steam has dangerous potential for destruction if misused, it also can provide awesome power to propel us forward on our evolutionary path if used wisely, with discretion.

Harness Scorpio Energy To Transform Yourself And Your Life 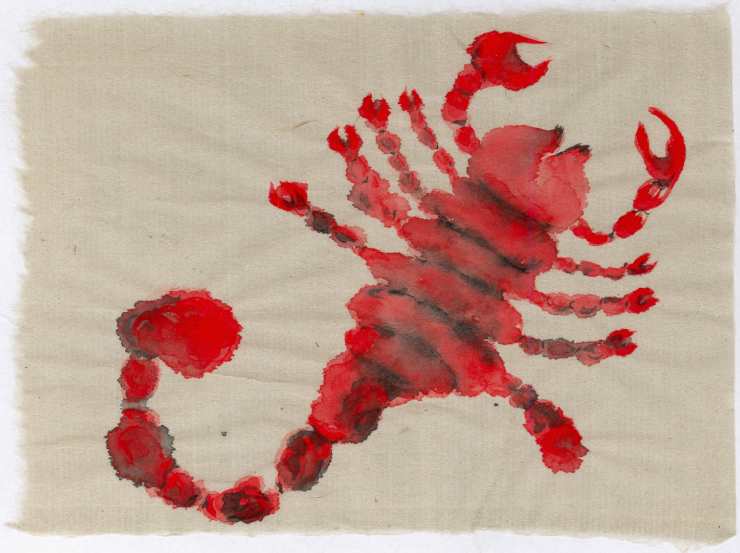 With this fourth square, Scorpio holds the key to our next Uranus square Pluto steps:

NOTE: If you have a copy of your birth chart, check for Scorpio to see the house it controls and know what areas of your life offer the greatest possibilities for transformation. Otherwise, you can get a copy of your chart immediately using the instant calculator on our website.

Scorpio’s energy and Mercury’s retrograde also offer an outstanding opportunity to go deeper within than we ever thought possible. Scorpio’s ruler, the mythological Pluto, ruled the dark and frightening underworld, yet he presided over vast hordes of gold and other riches because all who entered his domain had to turn over their worldly wealth. This story reminds us of the treasures that await us deep within ourselves and offers incentive for undertaking the arduous “Journey Within.”

Scorpio brings us to the very gates of hell, forcing us to look at all the dark places in ourselves and our world. Doing so strengthens us and restores our power: having looked at deepest darkness, we become fearless once we realize we have not only endured but survived what we thought would destroy us. Rather like a blackmailer, our fears and secrets enslave us, but if we resolve to bring light to our darkness and expose it ourselves, no one can hold it over our heads or use it to control us.

Along the way, we may feel quite terrible—and yet we will survive. Once we emerge from our darkness, our truth will have set us free. Also, our dramatic journey within will have shown us how little we truly need to feel safe and powerful once we have embraced truth—and how easy it can be to let go of what we have outgrown, what has enslaved us, what no longer serves us.

We can make the most of the fourth Uranus-Pluto square if we allow ourselves to stop (or at least slow down), look around at our lives and within ourselves, and take time to feel deeply and truly. With the days in the northern hemisphere now shorter than the nights, the Sun and other planets in introspective Scorpio, and additional planets in the other two sensitive water signs, we have overwhelming energies urging us to slow down. In fact, this is an excellent time to simply stop. Cease any activities that are not mandatory and give yourself ample time for rest, reflection, and simply “doing nothing.”

During this period, look back in your calendar, diary, or journal to see what was happening in your life at the time of the last three Uranus-Pluto squares:

How has your life changed? How have you changed? What shifts have you noticed in others’ lives, in your community, and in the world? How do you feel about these changes? Have you taken time to face your emotions and use them to understand your personal imbalances and the areas in which you must make adjustments?

How well have you done at the Uranus-Pluto square’s mandate to liberate (Uranus) your identity (Aries) and pioneer (Aries) into the future (Uranus)? To eliminate (Pluto) any structures or ambitions (Capricorn) that have outworn their use? What possessions or routines must you release, and what beliefs or self-made prisons must you destroy in order to clear the way for your true self to flourish?

Do Blue So You’re Equipped To Handle Red

Current astrological energies indicate that, if we take the time to work with our emotions, we will be able to do the work required by the Uranus-Pluto square.

As indicated in the “blue dot” diagram for the water signs, we have a flowing, supportive triangle of emotional support available to us right now. Saturn in Scorpio encourages us to undertake the work to dig for truth and use our findings maturely, Neptune in Pisces opens our hearts to unity with all creation and the dream of transcendent spirituality, Chiron in Pisces gives us tools to heal any addictions or escapist tendencies, and Jupiter in Cancer enlarges our ability to mother ourselves, nurture others, and give birth to goodness.

Then, through Jupiter, we can connect this supportive foundation energetically to the “red dot” diagram for the Uranus-Pluto square because both the water sign configuration and the square contain Jupiter in Cancer. In this way, we can toggle back and forth between watery self-love and fiery self-transformation, between sensitive self-compassion and determined self-improvement. 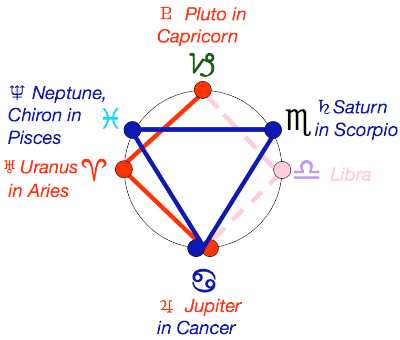 The Uranus-Pluto square cycle will reach one of its seven climaxes November 1, but it remains in effect until spring 2015. Throughout the rest of its cycle, it will be helpful to remember the fourth sign at the collective table of change: Libra.

As indicated in the combined blue and red diagram, the Uranus-Pluto square has been augmented this year with Jupiter’s entry into Cancer. These three planets give us an image of three contentious people sitting down at a round table, posturing for one another and bristling at each other’s energies. A fourth place at the table can be found in Libra, even though this sign is not hosting any planet for a long stretch of time as its three colleagues are. 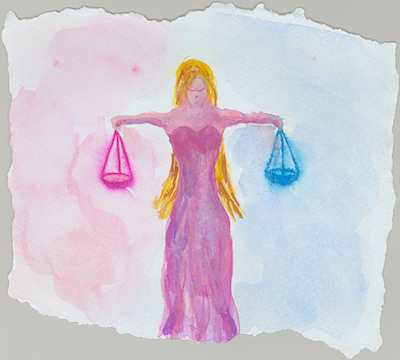 In this sense, Libra offers us an empty space to make what we will. Its energies remind us of the importance of relationships, equality, and peace.

If you would experience the Uranus-Pluto opportunity at its highest level, allow yourself to embody Libra ideals: fairness, justice, right relationships, and the “marriage of true minds.” Hold feelings of peace within your heart, and strive always toward graciousness, ensuring all beings have a place at our collective table.

Look with love upon all your sisters and brothers in the human family and across all life, in all forms, throughout creation. Let yourself hear the subtle harmony that pervades our universe. Now join in the chorus of beauty and love, as we move ever forward into our higher selves and our deeper destiny.